With the sudden interest in JL Audio products, Lucio Proni and Jim Birch knew they had to put their focus on turning the company into a real business. Lucio reached out to one of his first customers, Alan Wenzel, for help in establishing a rep network and sales department. Alan sold his retail business and took a huge leap of faith to join JL Audio in early 1990. Together with Lucio, he began to build a rep network and sign a few dealers up, focusing solely on independent retailers capable of doing high-end installation work. Jim Clayton, Alan Wenzel, Lucio and Maria Proni ran JL Audio from a tiny little warehouse unit in Miramar, managing the ever-increasing work load and laying the foundation for JL Audio as a worldwide business.

Since JL Audio only made subwoofer drivers, all of the Speaker Warehouse cars used MB Quart speakers, Precision Power amplifiers and StreetWires wiring products. JL Audio was able to get valuable publicity by appearing in joint magazine ads with the other companies. The arrangement benefited all the companies involved, boosting their presence in the market by creating a strong connection to the team's competition successes. This particular combination of products became very popular and sought after, enjoying many years of benefit from the ad campaign. No one at the time could have predicted that Jeff Scoon, the President of Precision Power and Andy Oxenhorn, the President of MB Quart USA would one day join JL Audio... or that Precision Power's Chief Engineer, Bruce Macmillan would one day design JL Audio's Slash amplifiers.

In early 1991, Manville Smith left Speaker Warehouse to join JL Audio full-time as Technical Director. Lucio and Manville spent months creating the JL Audio Reference Manual, which became an industry benchmark for technical support documentation and a valuable resource for JL Audio dealers. Alan Wenzel continued to travel around the country, cultivating a core group of high-end car audio dealers (many of whom are still dealers today). Dealers who brought the line into their stores on reputation quickly realized that by using the information in the Reference Manual they could design better subwoofer systems for their customers with JL Audio woofers.

Over the next decade, JL Audio grew exponentially, adding dealers and new products to the line. By the mid 1990's, the company was no longer a small enterprise and began to outgrow its building in eastern Miramar, Florida. Andy Oxenhorn joined the company as President in 1996 to help Lucio manage its future growth and direction, freeing Lucio to spend more time on the ever-growing list of engineering projects. Additional space was added in remote buildings to delay the inevitable, but in 1998 the big move was made to the company's present 140,000 sq.-ft. headquarters in western Miramar, Florida.

The staff grew over the next few years as the company continued to enjoy double-digit sales growth and began to expand into more markets. In 1999, amplifier designers Bruce Macmillan and David Krich joined the company to create a new line of JL Audio mobile audio amplifiers, with Jeff Scoon following in 2000 to manage the emerging electronics division.

Starting in 1999, JL Audio began loudspeaker driver production at the new Miramar factory, fulfilling one of Lucio Proni's primary goals. Prior to 1999, JL Audio contracted with other U.S. speaker builders to assemble its drivers, but Lucio had always had a clear desire to bring speaker building in-house. The first subwoofer drivers produced in Miramar were the 15W3 subwoofers, which served as a pilot project for the eventual production of the first W7's in 2001. Critical to JL Audio's entry into loudspeaker production was the hiring of George Rodriguez, an industry veteran with extensive manufacturing and quality assurance experience for a major audio manufacturer. Since then, George has developed JL Audio's loudspeaker manufacturing capabilities and created a world-class, state-of-the-art production department with top-level quality protocols. 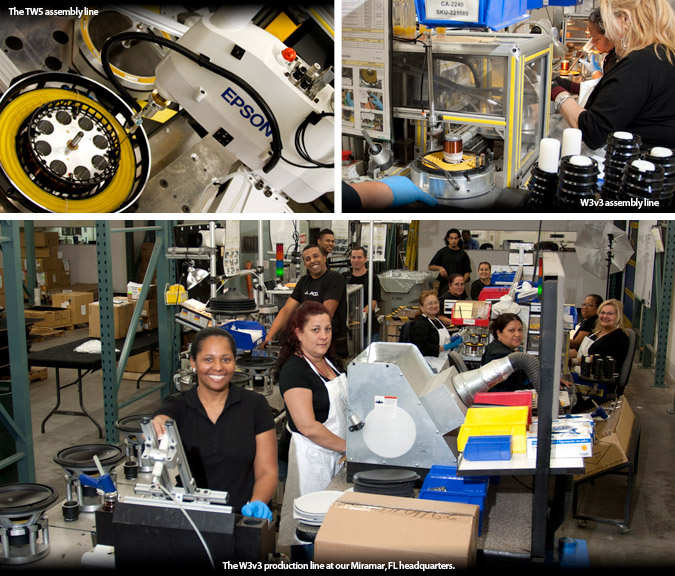 Carl Kennedy joined the company in 2003 to direct JL Audio's entry into the home audio market. Carl's vast experiences as a loudspeaker system designer and studio engineer were instrumental in the development of JL Audio's industry-leading, powered subwoofer systems. He also developed our rep force and dealer base in home audio and now leads JL Audio's entire sales force as VP-Sales.

A full marine audio product line was developed and brought to market in 2004. These products were based on the idea that the marine market needed a high-end solution. While JL Audio's first marine products were significantly more expensive than the typical products on the market, they were met with rapid acceptance due to their outstanding sound and reliability. Today, JL Audio marine speakers are built in our Miramar, Florida factory and are considered the reference standard for marine audio performance.

JL Audio's is a classic story of entrepreneurial success, made possible by the efforts of a highly motivated, talented and passionate group of real "audio people". These include JL Audio's employees, Sales Representatives, Dealers and International Distributors that were all instrumental in fulfilling our company mission, which is to "Sell Great Audio."